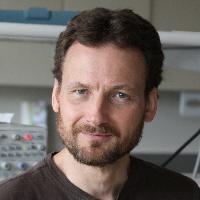 Gert Cauwenberghs received the M.Eng. degree in applied physics from University of Brussels, Belgium, in 1988, and the M.S. and Ph.D. degrees in electrical engineering from California Institute of Technology, Pasadena, in 1989 and 1994.

He is a Francqui Fellow of the Belgian American Educational Foundation, and received the National Science Foundation Career Award in 1997, Office of Naval Research Young Investigator Award in 1999, and Presidential Early Career Award for Scientists and Engineers (PECASE) in 2000. He was Distinguished Lecturer of the IEEE Circuits and Systems Society in 2003-2004, and chaired its Analog Signal Processing Technical Committee in 2001-2002. He currently serves as Associate Editor for IEEE Transactions on Biomedical Circuits and Systems, and IEEE Transactions on Neural Systems and Rehabilitation Engineering. He is Senior Editor for the IEEE Sensors Journal. https://jacobsschool.ucsd.edu/faculty/faculty_bios/index.sfe?fmp_recid=282