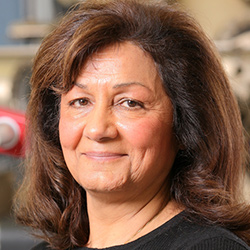 After heading the Exploratory Materials Lab at Thomson-CSF (France), she joined Northwestern University, Evanston, IL, as a Walter P. Murphy Professor and Director of the Center for Quantum Devices in Fall 1991, where she created the undergraduate and graduate program in solid-state engineering. She is one of the leading scientists in the field of semiconductor science and technology, pioneering in the development and implementation of major modern epitaxial techniques such as MOCVD, VPE, gas MBE, and MOMBE for the growth of entire compositional ranges of III-V compound semiconductors. She is on the editorial board of many journals such as Journal of Nanotechnology, and Journal of Nanoscience and Nanotechnology, an Associate Editor of Opto-Electronics Review. She is on the International Advisory Board for the Polish Committee of Science, and is an Adjunct Professor at the College of Optical Sciences of the University of Arizona, Tucson, AZ. She has authored or co-authored more than 1000 papers, more than 31 book chapters, and 18 books, including the textbooks Technology of Quantum Devices (Springer Science Business Media, Inc., New York, NY U.S.A. 2010) and Fundamentals of Solid State Engineering, 3rd Edition (Springer Science Business Media, Inc., New York, NY U.S.A. 2009). Two of her books, MOCVD Challenge Vol. 1 (IOP Publishing Ltd., Bristol, U.K., 1989) and MOCVD Challenge Vol. 2 (IOP Publishing Ltd., Bristol, U.K., 1995), discuss some of her pioneering work in InP-GaInAsP and GaAs-GaInAsP based systems. The MOCVD Challenge, 2nd Edition (Taylor & Francis/CRC Press, 2010) represents the combined updated version of Volumes 1 and 2. She holds 55 U.S. patents and has given more than 1000 invited and plenary talks. Her current research interest is in nanoscale optoelectronic quantum devices. She has an H -index of 88.

Dr. Razeghi is a Fellow of MRS, IOP, IEEE, APS, SPIE, OSA, Fellow and Life Member of Society of Women Engineers (SWE), Fellow of the International Engineering Consortium (IEC), and a member of the Electrochemical Society, ACS, AAAS, and the French Academy of Sciences and Technology. She received the IBM Europe Science and Technology Prize in 1987, the Achievement Award from the SWE in 1995, the R.F. Bunshah Award in 2004, IBM Faculty Award 2013, the Jan Czochralski Gold Medal in 2016, the 2018 Benjamin Franklin Medal in Electrical Engineering, and many best paper awards. She is an elected life Fellow of SWE, IEEE, and MRS.