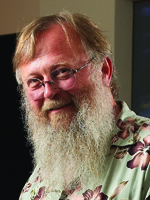 Dr. Thomas C. Caudell received his PhD in the fields of Physics and Astronomy from the University of Arizona, Tucson in 1980. Following that he was a Senior Staff Physicist at the Hughes Artificial Intelligence Center in Malibu, CA, and a Senior Principal Scientist in Research and Technology at The Boeing Company in Seattle, WA.  In 1994, he joined the University of New Mexico and is now a Professor of Electrical and Computer Engineering with secondary appointments in Computer Science & Psychology.