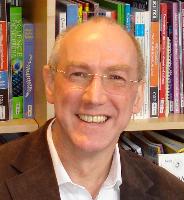 Biography
Alan F. Winfield (Member, IEEE) received the Ph.D. degree in digital communications from the University of Hull, Kingston upon Hull, U.K., in 1984. Dr. Winfield is Professor of Robot Ethics at the University of the West of England (UWE), Bristol, U.K., Visiting Professor with the University of York, York, U.K, and Associate Fellow of the Leverhulme Centre for the Future of Intelligence, Cambridge, U.K.
Dr Winfield co-founded the Bristol Robotics Laboratory, UWE, where his research is focused on cognitive robotics. Until recently he was director of UWE’s Science Communication Unit. He has published over 240 works, including Robotics: A Very Short Introduction (Oxford University Press, 2012).
Dr. Winfield is an advocate for robot ethics; he is a member of the British Standards Institute working group that drafted BS 8611: Guide to the Ethical Design of Robots and Robotic Systems. He sits on the executive of the IEEE Standards Association Global Initiative on Ethics of Autonomous and Intelligent Systems, and chairs IEEE Working Group P7001, drafting a new standard on Transparency of Autonomous Systems.